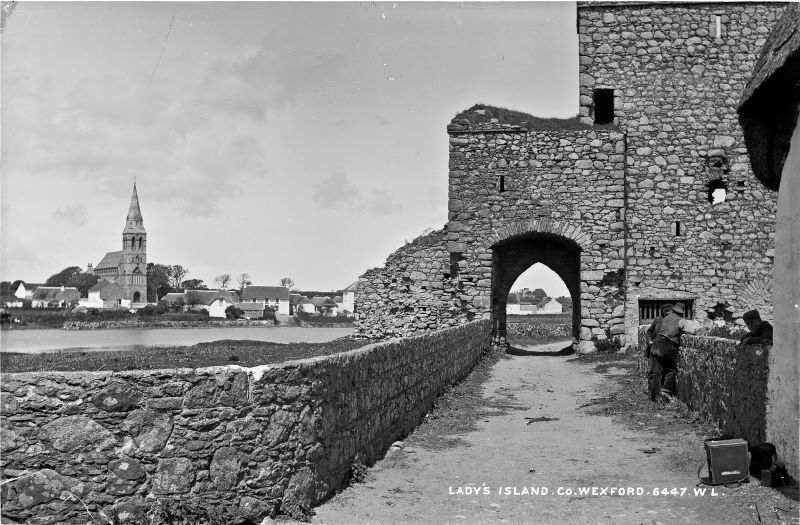 Lady’s Island, County Wexford, home to some of my Sinnott ancestors. Image via National Library of Ireland.

I have spent a lot of time over the last few years researching my family history, and it has been a fascinating journey. I’ve discovered a lot about relatives I knew little or nothing about, and I’ve also found many, many people I didn’t know existed.

If you have been thinking about learning more about your family history, but don’t know where to start, the following sources will give you a pretty good picture of who you are and where you came from.

If you look at each of these sources in order, by the end of the process you should have a family tree going back to the mid-19th century, and possibly even further, depending on how much information you can uncover in each step.

And best of all, these sources are freely available online.

A word of warning, though —- genealogy is addictive, and once you start, you won’t want to stop.

I really can’t emphasise this enough — older relatives in particular will be a goldmine of information on their parents’ and grandparents’ generations. Talk to them before you do anything else.

At the very least, they will be able to help you put together a rudimentary family tree going back to your grandparents and great grandparents. If you’re lucky, you’ll also hear family stories that have been passed down through the generations which will give you details that will help you explore the lives of your ancestors.

When I was younger my mother told me the story of Samuel May, my great great grandfather, who had gone missing while travelling from his native Belfast to New York. He was a businessman, according to the story, who regularly travelled between Ireland and the US.

Piecing together the details of Samuel’s life and death was quite the adventure. It took me a long time to figure out what he was doing in America, and how and where he died. I won’t go into too much detail as I hope to write about his life as a copper smelter in Arizona at some point, but I did eventually solve the mystery of what happened to him.

Unfortunately my mother, who passed away in 2018, was gone by the time I discovered Samuel’s story, but the information she gave me, and the curiosity sparked by his disappearance, helped me to track him across two continents.

Knowing where people lived is important, too, particularly when it come to identifying your ancestors in official records.

A census was taken in Ireland once a decade from the early 19th century, but unfortunately the 19th century records were destroyed in a fire in the Four Courts during the Civil War.

Now, only fragments of the 19th century censuses remain, but the first two censuses of the 20th century are freely available to browse and search online, thanks to the National Archives of Ireland.

Each census is organised by townland, and this is why knowing where your ancestors lived can be useful, particularly when it comes to identifying your family in an area where their surname was common.

As you can see from the last record if you click through, the family name is actually spelled ‘Lunday’ in the Census record. Knowing where to look geographically can be really helpful when it comes to finding people, as there are occasional transcription errors in the records. In the case of the Lundys, whoever filled out the form seems to have spelled the name with an ‘a’.

Once you have found a family or individual, be sure to click ‘show all information’ and view the original images, located below the transcribed details. There, you can find out more about each family member’s occupation and birthplace, as well as a wealth of information on the house and outbuildings.

Birth records are especially useful for filling in the gaps in your knowledge — aside from confirming a date of birth, they contain such information as the address where someone was born, their mother’s maiden name, and father’s occupation. Look out too for the name of the person registering the birth — this was often the job of the father but could also be undertaken by a grandparent, aunt or uncle, or the local midwife.

Catholic parish registers for the 19th century are also available online, and are generally very useful for tracking your family through the generations, though how much information is available can vary greatly from parish to parish.

Most will cover at least part of the 19th century, and some even offer records going back to the 18th century (though these are rare). All parish registers include extensive baptism records, with some also offering marriage records and even deaths.

Most genealogy websites, such as FindMyPast and Ancestry, will allow you to search parish registers for your ancestors (assuming you have a paid membership), and this is a useful way to find families.

However these text searches are only as good as the transcriptions, so there is always the possibility that you will miss some records. For example you might be able to find baptism records for some siblings in a family, but miss one or more records due to a misspelling.

There really is no substitute for going through the records page by page. It’s a time consuming exercise, but you will find people who don’t turn up in text searches, along with notes and other gems which will give you an insight into what life was like in the parish.

Griffith’s Valuation was undertaken throughout Ireland between 1848 and 1864. This was basically a valuation of all property in the country, in order to determine each householder’s liability for poor rates — the tax payable to subsidise the Poor Law Unions, regional bodies which ran workhouses and administered relief to the poor.

Carried out by Richard Griffith over the course of 16 years, the valuation is a land survey, and was never intended to be used as a census. However, in the absence of census records for the 19th century Griffith’s Valuation has become one of the most important census substitutes available.

One of the main weaknesses of Griffith’s Valuation, compared to a census, is that the only name recorded for each property is the head of the household, so there is no way to know who else was living in a house.

On the other hand, the accompanying maps, which can be superimposed over Google Maps, allow you to identify the property where you ancestors lived. Thanks to Griffith’s I have found at least two houses in Co Wexford, which were occupied by my ancestors in the 19th century, that are still standing today.

The Tithe Applotment was a land survey undertaken in the 1820s and 1830s, to determine the rate payable in tithes — a tax towards the Protestant Church in Ireland.

The Tithe books are less useful than Griffith’s Valuation — for one thing, they were designed to assess agricultural productivity, so urban areas are not included. However they are the best source of information for tracing your ancestors in the pre-Famine years.

The Tithe books can help to identify who was the head of a household in the decades before Griffith’s, and could therefore allow you to trace another generation, or give you an idea of when your ancestors moved to an area.

A word of warning about the Tithe Applotment Books – the name transcriptions can be particularly poor, so you may have to browse to the relevant townland to find a family.

And if you’re not sure which townland your ancestors lived in, or where that townland was, townlands.ie is an excellent reference.

I’ll be referring back to these sources in future, as well as looking at other, less common sources that will help to flesh out your family history. But before I do that, I want to look at an event that has gained increasing relevance in the last few months — the 1918 Spanish flu pandemic, and how it affected our ancestors.