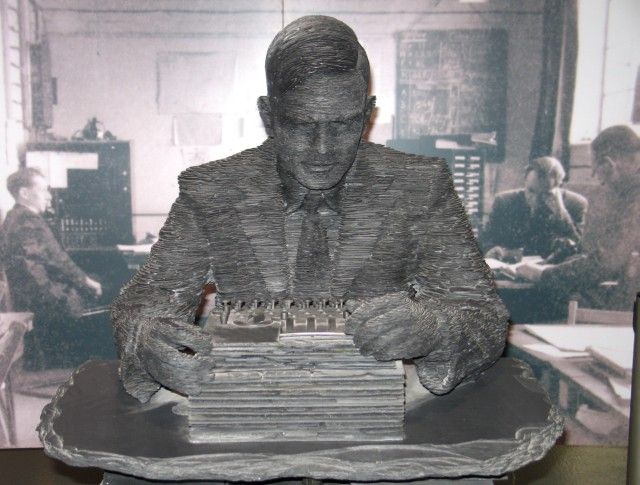 Alan Turing is best known as the man who cracked the Enigma code in his role as a World War II codebreaker at Bletchley Park, but this was just one of his accomplishments.

A gifted polymath who moved the course of human knowledge forward in areas as diverse as artificial intelligence and molecular biology, Turing was also responsible for designing the first computer to store software in electronic memory. And he did all this in just two decades.

Born in London on 23 June 1912, Turing showed signs of genius in science and mathematics at an early age. He studied mathematics at Kings College in Cambridge, where he received first class honours and was made a fellow of the college at just 22.

His research soon turned to computation. In an academic paper he published while studying for a PhD in 1936, he proposed a theoretical machine which, he argued, with the correct settings, could perform any calculation that could be expressed as an algorithm, and express it on a single piece of infinite paper tape.

Each a-machine, as he called them, could solve only one computation, so he proposed a universal machine which could be configured to emulate any single machine; essentially a model of a stored programme computer, the universal Turing machine, which could be programmed to perform any task for which a programme could be devised.

Turing developed an interest in cryptology during two years spent studying at Princeton University, and on his return to the UK in 1938 he began work with the Government Code and Cypher School, where his focus was on deciphering the coded messages generated by the German Enigma machine.

Enigma machines used a series of rotors and a plugboard — called a stecker board — to alter the circuits within the machine, which in turn altered the output when a letter was pressed on the machine’s keyboard.  In this video from mediadromeuk, Murlyn Hakon of the National Codes Centre at Bletchley Park explains how the machine worked.

All Enigma operators configured the machines daily using the same settings, and these synchronised settings could be used to both encrypt and decrypt messages. This allowed German forces to send and receive instructions for military operations which, if intercepted, could not be understood.

In the years before World War II, the Polish Cipher Bureau had developed a machine, known as the Bomba, which could decipher Enigma messages, but the Germans added more rotors and plugboard connections over time, greatly increasing the numbers of possible permutations which could be created by the machine.

Codebreakers at Bletchley Park were able to use weaknesses in the Enigma code — namely the repetition of common words and the fact that no letter could be encrypted as itself — to greatly reduce the possible configurations each day (Enigma could create some 150,000,000,000,000,000,000 different letter combinations).

Among Turing’s many achievements at Bletchley Park was the invention of an electromechanical machine, the Bombe, based on the Polish Bomba, which automated the work of eliminating most of the possible Enigma settings each day, leaving just a handful of permutations for cryptanalysts to work though manually.

The Bombe was improved upon by others, including engineer Tommy Flowers, who designed and built Colossus, the world’s first programmable electronic computer.

Turing was legally prohibited from discussing his wartime work but it informed some of his subsequent research. After the war he returned to academia and worked on the design of the Automatic Computing Engine, an early stored programme computer, at the National Physical Laboratory in London. While Turing’s design was never built, it influenced much of the work on early computers that followed it.

He had long held an interest in artificial intelligence, and began working on this area in earnest when he moved to the University of Manchester in 1948. In his 1950 paper Computing Machinery and Intelligence, he proposed a test of artificial intelligence, which he referred to as an imitation game and is now known as the Turing test; this involved a first person, the judge, conversing digitally with a human and a computer. If the judge could not distinguish between the human and the computer, the computer would be regarded as having shown the ability to emulate the cognitive functions of a human.

“A computer would deserve to be called intelligent if it could deceive a human into believing that it was human.” – Alan Turing.

The Turing tests remains a mainstay of AI research and a reverse version of this test, the Completely Automated Public Turing test to tell Computers and Humans Apart (CAPTCHA), is used online to differentiate between humans and computers.

Turing’s home was burgled in 1952, and during the subsequent investigation police learned that he was in a relationship with another man. Turing admitted the relationship, though homosexuality was illegal and subject to strict penalties at the time.

Later that same year he was convicted of gross indecency and given the choice between imprisonment and hormonal treatment with artificial oestrogens, which amounted to chemical castration. He chose the latter.

On June 8 1954, just two weeks before his 42nd birthday, Alan Turing was found dead at his home in Manchester, having eaten an apple laced with cyanide. A coroner’s inquest later ruled his death as a suicide.

Turing received a posthumous pardon for his conviction earlier this year.