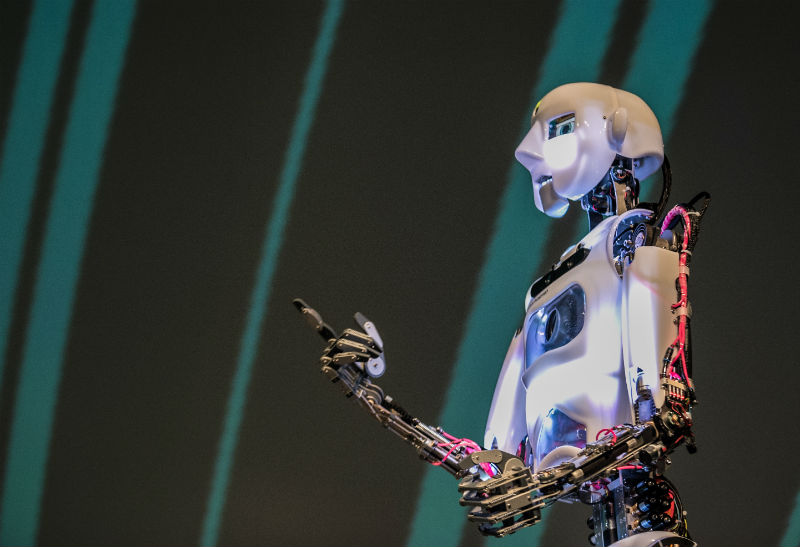 For a robot, RoboThespian, or George as he is known to his friends, is pretty personable. He’s a big movie buff and particularly likes the original Star Wars. He sings, does impressions, and even flirts. And he has some strong opinions about robotics.

George was at Dublin Tech Summit to entertain people as they entered the Convention Centre with his film-related antics, and he took to the stage on day two for a discussion on robotics.

According to George, robots will definitely be a part of our future – in fact, they’re already all around us – but we won’t have humanoid robots in our homes.

RoboThespian was created by Engineered Arts Ltd specifically to interact with humans, but most robots – designed to be functional rather than conversational – don’t need to look like us.

“You’re not going to see many robots me like in the future, and if you do they won’t be in your home,” he said. “Robots like me will be in public places, shopping malls, at the airport, sports events, that kind of thing, but you don’t need a robot like me in your home.

“If you think about Star Wars, the original films, there were two famous robots, C3PO and R2D2. R2D2 was just functional, he could do all the useful utility tasks in much the same way your dishwasher can wash the dishes for you. C3PO was all about talking to humans, and that’s why you build robots in human shape.”

George reckons that the Star Wars robots offer a very accurate vision of the future, where most robots will be like R2D2 – functional devices designed for utility rather than conversation – and far fewer will be like C3PO.

In fact these robots are already here – by definition, robots are simply machines that can be programmed to carry out autonomous tasks. We can buy little robots to vacuum our homes, or mow our lawns. Driverless cars are, for all intents and purposes, robots. People have worked alongside robots in factories for years, and we are developing robot kitchens which can cook our meals, and even robot farms which can grow our food, but none of these look remotely human.

And we can build robots designed to fight, and even kill, something that Ed Hoppitt of VMWare knows a few things about. Hoppitt, the reigning champion of Robot Wars, expressed concerns about the ethics of building robots that can end human life, or in the case of self-driving cars, may have to make ethical decisions about who to save in the event of an impending crash.

“Robots are good at wars,” George responded. “Robots do whatever they’re told to do. The military like robots because they don’t ask questions and they don’t have a conscience. It’s down to you, it’s not really about me. I’m just a tool, I’m just a piece of hardware and what you do with me is totally a human decision, so don’t blame it on the robots please.”

But while we need to be careful of the choices we make in the future, according to George we have a long way to go before we need to tackle the ethical and legislative dilemmas involved in real robot wars. The first autopilot was used in a plane in 1912, more than 100 years ago, so while robotics appears to be advancing quickly our progress in this area has actually been quite slow.

Even Boston Dynamics, acquired by Google in 2013 and best known for its terrifying mechanical packhorse Big Dog, is about 10 years away from having a marketable product (Big Dog was ultimately deemed too noisy to be of practical use on a battlefield, where soldiers rely on stealth to avoid giving away their position).

“That’s one of the leading robotics companies in the world, so don’t panic, you have time,” George added.

“I think the biggest question about technology is, how are we going to function as a society? What do we choose for our future? We can’t put the genie back in the bottle. We have to decide what we’re going to do. We have to make wise decisions going forward, so stop and think.”