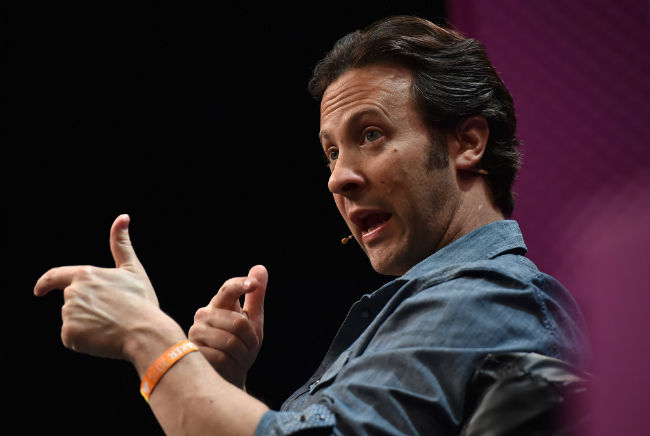 Social media is like catnip for our brains, stimulating our rewards systems and providing constant affirmation, according to neuroscientist and author David Eagleman.

Eagleman, who spoke at Web Summit with Andrew Jack of the Financial Times on why our brains are wired for social media, explained how the brain constructs reality and how our connected world is changing the way our brains work.

“The brain is a restless shape shifter, constantly reshaping itself,” he said. “Your experience of being conscious right now is unique in history. It seems as though we are just piping reality through our senses, but in fact your entire reality is taking place in the closed theatre of your skull. Your brain lives in silence and darkness and all its sees are electrochemical signals. Your brain lives in darkness but it lights up the world.”

Eagleman’s research areas include social neuroscience, a relatively new field of study which explores the interface between social and biological systems.

“Brains have traditionally been studied in isolation, but in fact a lot of the circuitry of the brain has to do with other people,” he explained. “We are wired to seek social affirmation from peer groups and that is what has allowed us to build civilizations. We’re entering a period in history where social media is like catnip to what our brains want. It really stimulates our rewards system. Our brains are always seeking everything social.”

This new period of social on demand is also changing the way our brains work.

“It’s very difficult to study the effects of social media on people growing up wired because there is no control group,” he said. “We know for sure that growing up wired changing brain wiring. If you show us a block of text you can measure what our eye movements are doing. You don’t have any conscious control, but for someone in generation Y their eye movements will take a different pattern, essentially the way a web page is laid out, because that’s how they are used to seeking information.”

There are significant upsides  to growing up connected, however, including the ability to access information whenever our interest is piqued, a process which helps to consolidate learning and will likely change the way children are educated.

“I think the next generation is going to be a lot smarter than we are,” he said. “Now there is a possibility for adaptive education through software that keeps kids at a little struggle, which is best place for education. Kids get information just in time; when they’re curious they look it up. When you’re curious you have the right cocktail for brain plasticity.”

Eagleman predicts a move from learning by rote to learning to question the validity of information. We are already moving towards favouring abstract thinking over simple memory, as evidenced by the fact that most of us no longer remember phone numbers.

“The education system needs to keep up with changes so teachers aren’t asking questions that they can just Google the answer to,” he warned. “If we’re exposed to a lot of big ideas and you don’t have to spend a lot of time memorising crap, this allows you to build high level structures about the world. Not having to memorize gives you a better chance to build the concepts, that’s my speculation.”

On the flipside, growing up with instant access to our friends and any information we require is resulting in shorter attention spans, and the ability to maintain attention is likely to be an increasingly important skill for children to learn.

“Kids need to learn the cognitive tools to be able to turn inward and not be constantly monitoring the world and reacting to it,” he said. “A big part of what the human social brain does is it tries to understand other brains. It does that through mechanisms for empathy. The reason I empathise with you is so I can stand in your shoes. One of ways we do that is by mirroring facial expressions. By trying on your face, I get to quickly feel what you’re feeling.

The same problem can arise online, where people must infer others’ emotions without necessarily being able to see their facial expressions, though Skype and other videoconferencing tools allow us to empathise directly. The ability to read someone else’s thoughts, from the books which were made possible by the printing press to the ability now to read other people’s blogs or tweets on demand, means we are constantly standing in other people’s shoes and experiencing the world through their perceptions.

However he warned of the filter bubble which exists on the web – we tend to read and absorb content from people whose opinions most closely match our own, confirming our own biases.

“The danger we all have in our lives is that we see content on the web that confrms our own biases, and that has consequences for brain plasticity,” he said. “It’s very useful to be exposed and confronted with things that don’t necessarily match our biases.

“Who you are, the way your brain comes to be exactly like it is, is down to whole culture that you’re dropped in to. When we look at the history of the human species we can understand it as one megaorganism. Individual consciousness doesn’t end at the boundary of my skin, it extends to all the people around me,” he told Andrew Jack. “Even this conversation changes my brain and your brain, and makes them more like each other.”