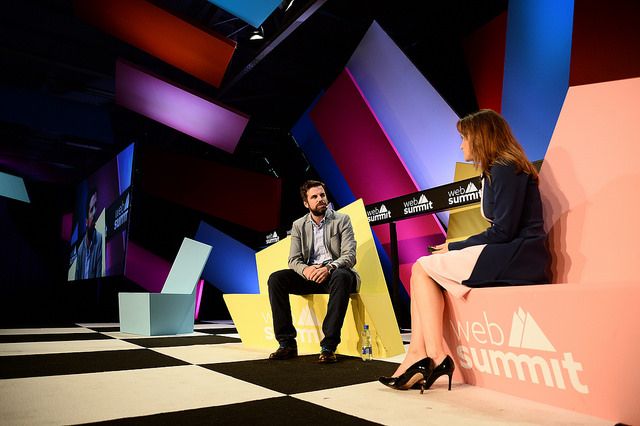 Mike McAvoy of The Onion in conversation with Anne-Marie Tomchak of the BBC at Web Summit. Photo: Sportsfile.

The Onion is one of the best known satirical publications in the world, and like many other digital publishers it bolsters advertising revenue with branded content consistent with the tone of the rest of the site. Unlike most other publishers, this means bringing the same irreverent ethos of its articles and videos to its advertising.

Mike McAvoy, president of Onion Inc, discussed the company’s success in partnering with advertisers who “get the joke” on Web Summit’s marketing stage. The Onion parodies its advertising customers in much the same way as it parodies the news.

“What The Onion does so well is it satirizes any powerful institution that dominates our minds and finds it really hard to tell the truth of what’s going on,” McAvoy told the BBC’s Anne-Marie Tomchak.

This includes parodying the sometimes inane rolling news cycle of broadcasters like Fox News and CNN:

Onion Labs, the company’s marketing arm, handles advertising and sponsored content for all Onion sites, including Clickhole and Starwipe, which send up viral sites and celebrity news, respectively.

“We had to find a smart way to work with advertisers,” McAvoy said. “The first thing we do, we approach brands and work with brands who get it.  We teach them as part of our sales process that they have to be in on the joke if they want reach our audience. Older brands that sometimes take themselves too seriously are starting to wake up to the idea that younger people don’t take their marketing seriously.

“You have to factor in the intelligence of your audience. You can’t get an Onion joke unless you know what’s going on in the world.”

Onion Labs has worked with major brands, from Netflix to Febreze to Jameson Irish Whiskey.

“To Jameson’s credit they really embraced the joke,” McAvoy said. “They found a way to trade off what The Onion does so well by not taking themselves seriously. “With advertising you have to stay with the same principles as the rest of the content. All our sponsored content is actually created by our Onion editorial staff. We want to make sure anything that appears on our site has the same principles as our editorial content, and we want it to be just as good.

“We make sure it’s about the principle of train, not trick, your audience,” he added. “We want to make sure they know it’s sponsored. We want a brand to be in on the joke, and if you do that the right way no one is ever duped. Things need to stand on their own comedic merits in order for an audience to find them worthwhile.

“We’ve had tons of people who say, ‘this isn’t for me’. If you can’t create something that your audience likes, it’s not going to work.”