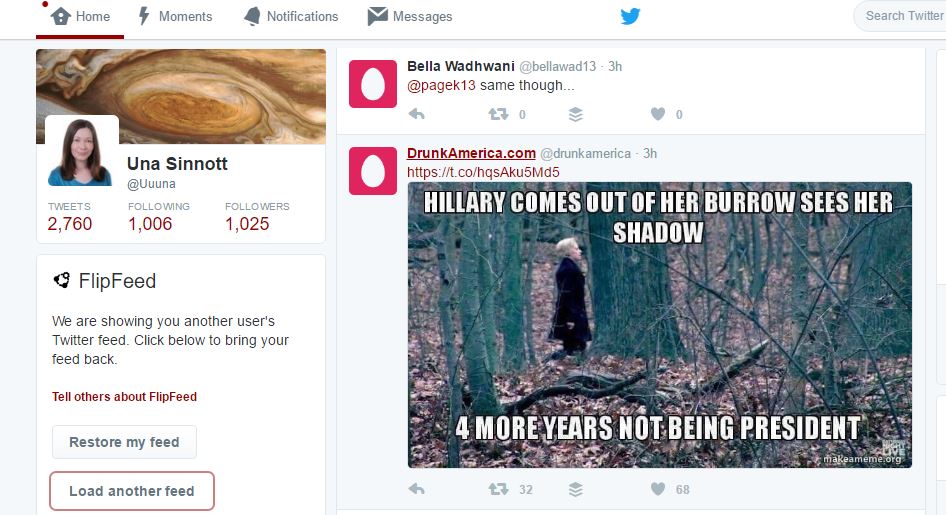 Not something I would usually see in my feed.

Whether we like to admit it or not, each of us lives in a filter bubble. For the most part, we tend to gravitate to people with similar worldviews to us, and away from people whose views we find objectionable. This is particularly true online where we have complete control over who we connect with.

We choose our friends based on our shared values and interests, and our news sources on the values reflected in their reportage. And our online data contributes to reinforcing this filter bubble in ways we may not even be aware of.

Facebook delivers updates in our News Feed based on the content we have previously interacted with. Google, meanwhile, provides you with search results based on your previous behaviour and the preferences and intent it infers from your browsing history, location, and other metrics.

Basically, every bit of data you create online contributes in turn to everything else you read and see, and so your personal echo chamber grows.

FlipFeed, a Chrome extension created by MIT Media Lab, aims to take you out of your filter bubble by turning your Twitter feed on its head. Install this extension, and you can ‘flip’ your Twitter feed to see the feed of another real user. These users have been picked based on their political views – each user is identified as either left or right leaning, as inferred from their tweets – and the extension aims to serve you the feed of someone whose views contradict yours.

According to the makers, the purpose of this exercise is to increase empathy between people with opposing views.

“We hope tools like FlipFeed will enable us to explore how social media platforms can be used to mitigate, rather than exacerbate, ideological polarization by helping people explore and empathize with different perspectives,” the post announcing the extension states.

I’ve played around with FlipFeed, and it was a mixed experience. It doesn’t always give me opposing views, but then I don’t tend to be overtly political on Twitter. Someone who tweets more consistently about politics may well get different results. As the tool is developed in Massachusetts – and presumably given the US political turmoil on Twitter and everywhere else at the moment – the feeds it shows are of American users.

By using FlipFeed I’ve seen a lot of both anti- and pro-Trump content, and quite a bit of what could reasonably be described as alt right. Though most of the content in these feeds was pretty benign, I find the pro-Trump movement and the alt right deeply troubling. However but by using FlipFeed I did notice two things:

(a) I’m convinced that my world view is correct. I believe in the free movement of people, equality, freedom of expression, and climate change, and I think any form of discrimination is wrong. I can’t understand why anyone would believe otherwise. However people who disagree with my views also believe they are correct. It’s easy to focus on trolls and extremists when we think about the opposing side of any issue of public debate, but most people just want what they believe is best for their world.

(b) People with what I regard as objectionable views are also interested in other things, like sport, news, animal welfare, fashion, and even recipes. Obviously every person has diverse views and interests, but it’s something that can be overlooked online, or when we tend towards the very human habit of focusing on the negative. Being able to observe this more rounded view of right-leaning Twitter users helps me to see what we have in common, rather than focus on how we differ, which is the point of the extension.

FlipFeed was built by researchers in the Laboratory for Social Machines at the MIT Media Lab.