I have been at Web Summit this week, learning about how emerging technologies are shaping the future of journalism and society.

Branding is essential for anyone in the business of publishing, both for media companies and for those brands seeking to communicate with established audiences through sponsored content. This latter content – known as brand journalism, or content marketing – has become an income stream for many publishers facing declining ad revenues.

As part of the Content Summit at this year’s Web Summit, Charles Yardley, international MD of Forbes and publisher of Forbes Life, and Carla Buzasi, global chief content officer with the Wall Street Journal, sat down with Carla Zanoni, executive emerging media editor with the WSJ, to discuss the relevance and impact of branding on their respective organisations.

The talk also tackled how these legacy media companies have responded to the disruption of journalism in the last five years.

According to Yardley, one of Forbes’ earliest moves in developing its own digital brand was to open up its content management system to outside contributors, which has seen the company’s newsroom effectively grow to some 2,000 journalists. Forbes also changed the way it pays contributors – rather than the traditional fee by the word, all contributors are paid based on the size of the audience they attract to the Forbes site. The site was also made available, for a fee, to marketers seeking to promote their own brands via Forbes.

“We have to get closer to the audiences,” Yardley said. “That’s why we repositioned the business for an era of social journalism. The core of what it stands for hasn’t changed – we write about entrepreneurial capitalism.”

Like other media, Forbes has seen a dramatic shift towards mobile, with some 50 per cent of its traffic now coming from mobile devices. Somewhat more surprisingly for a site that focuses on business and related topics, Forbes’ most highest trafficked articles are lists  – it regularly publishes rich lists, from the top earning dead celebrities to the best countries to do business in, and its most popular, the 30 under 30, which has grown into a major conference for millennial entrepreneurs. 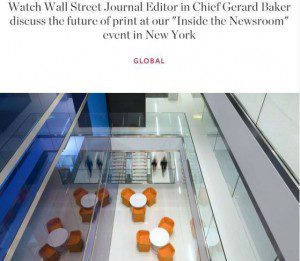 Inside the Newsroom is among the most popular events organised by the Wall Street Journal.

Events – connecting with readers in real life – are an increasingly important part of many organisations’ revenue structures. The Wall Street Journal has created an experience-based subscription package, WSJ+, which includes talks, getaways, access to exclusive dining experiences, and more.

“Both in terms of growing a brand and connecting, the engagement you find when you are able to connect with someone on social, on the site, in person, is tremendous,” said Buzasi. “The Inside the Newsroom events are one of the best attended events. They [readers] want to see behind the curtain.”

Brands have also had considerable success in using the Forbes CMS to connect with readers, providing a content marketing platform which, when properly managed, can be incredibly successful. According to Yardley, brands are producing some of the most popular content on the Forbes site, provided they focus on thought leadership and avoid a hard sell.

“Trust and transparency is really important,” he said. “The two most trustworthy brands in the financial space are the Wall Street Journal and Forbes. On the website it’s clearly labelled.  Where it doesn’t work is where you start to blur the lines. We’re giving that brand direct access to that same content management system, and the minute they go down the route of trying to sell a product or service, that’s where they lose the audience.”